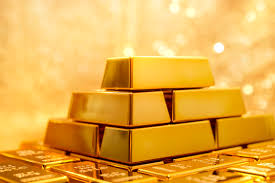 The price of gold fell below $1,300 an ounce earlier this week.

It’s the first time the yellow metal has traded below that level since the Brexit vote in June shocked global markets. And some experts think that Donald Trump’s recent woes may be a reason for gold’s slump.

Yes, gold prices are still up 20% this year. But they have fallen more than 6% since hitting a 52-week high of nearly $1,365 an ounce in early July. Gold prices plunged 3% on Tuesday alone.

Shares of top gold miners such as Newmont (NEM), AngloGold Ashanti (AU) and Barrick Gold (ABX), have been hit even harder during the selloff. So have some wacky ETFs that make oversized bets on gold prices and mining stocks.

And one ETF that shorts gold miners and has the ticker symbol of DUST (DUST) — get it? — is up nearly 50% this week.

So why are some investors predicting an end to this year’s gold rush and heading for the exits?

President Clinton isn’t as good for gold as President Trump. Gold, like the broader stock market and the Mexican peso, has tended to rise (and fall) in tandem with Donald Trump’s polling numbers.

The financial markets continue to view Trump warily. His unpredictable nature is scary. Remember that one of the key clichés about Wall Street is that investors hate uncertainty. He’s uncertainty with a capital U. Heck, he’s ALL CAPS.

“We expect that [Trump’s] policies will be inward looking and will weaken the fundamentals of the U.S. economy. In addition, his rhetoric and possibly policy actions could create domestic and international uncertainty at best, and upheaval at worst,” said Georgette Boele, coordinator of currency and precious metals strategy at ABN Amro, in a report earlier this summer.

Shortly after Trump had his coronation moment at the Republican National Convention in August, some gold experts were even predicting that gold could get back to all-time highs above $1,900 an ounce from 2011 during a Trump presidency.

Trump’s momentum has started to fade though. And with it, so have gold prices. For the time being at least.

The election is still a month away so it would be foolish to count out Trump. Or gold.

To that end, it’s worth noting that many gold miners have more than doubled this year though. The recent pullback could just be a correction and not the start of a long, bear market for gold.

Then again, the Federal Reserve could kill the gold rally for good — no matter who wins the race for the White House.

Rate hike + stronger dollar = bad for gold. The Fed has been hinting that a rate hike could be coming in December. Cleveland Fed president Loretta Mester even suggested that the Fed could boost rates in November.

Mark my words, there is NO way the Fed moves days before the presidential election. But the president-elect is likely to be greeted with higher rates in December as long as the stock market and economy don’t crater in the next few months.

That’s not good for gold. Low rates have helped gold lately because investors had little reason to own U.S. bonds that yield next to nothing. If the Fed starts boosting rates, bonds suddenly become more attractive.

The dollar, which has strengthened against other currencies in recent weeks, could keep rallying too if rates climb. And that’s bad for gold since many fans of the metal have flocked to gold due to fears that the value of the U.S. dollar would erode, not increase.

Still, some think it would be a mistake to count out gold just yet. This could just be a blip. Many gold mining stocks have doubled this year, so the pullback may be just a healthy correction.

Is this just a pause in gold’s bull run? Gold prices could get a lift later this year as well due to demand from consumers in China and India.

Despite concerns about China’s economy slowing down, prices could spike ahead of next year’s Lunar New Year celebration.

Gundlach has been saying for months that gold could benefit from more turmoil in global financial system. He has specifically cited worries about the health of Deutsche Bank.

Although fears about Deutsche needing a bailout to deal with its legal fines in the U.S. are waning a bit, the Teutonic titan (and other European banks) aren’t out of the woods yet.

Meanwhile, Gross just wrote in his most recent monthly outlook that gold — which he dubbed a “historic relic” should benefit from the fact that rates around the world remain low — and in some cases, negative.

“At some point investors — leery and indeed weary of receiving negative or near zero returns on their money, may at the margin desert the standard financial complex, for higher returning or better yet, less risky alternatives,” Gross wrote.

In other words. Gross is not worried about a massive rate hiking spree by the Fed crushing the value of gold.