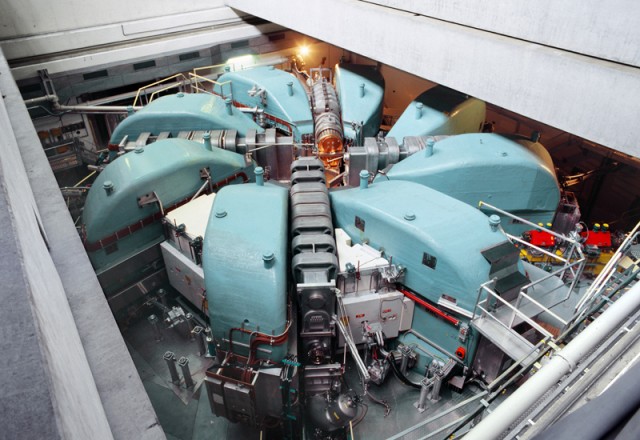 Although tiny, a proton takes up a finite amount of space, enough to fit three quarks, a host of virtual particles, and their associated gluons. The size of a proton’s radius is determined by these particles and their interactions, and so is fundamentally tied in to theories like the Standard Model and quantum chromodynamics.

We can measure the radius because the proton’s charge is spread across it, which influences the orbit of any electrons that might be circling it. Measurements with electrons produce a value that’s easily in agreement with existing theories. But a few years back, researchers put a heavier version of the electron, called a muon, in orbit around a proton. This formed an exotic, heavier version of the hydrogen atom. And here, measuring the proton’s radius produced an entirely different value—something that shouldn’t have happened.

This “proton radius puzzle” suggests there may be something fundamentally wrong with our physics models. And the researchers who discovered it have now moved on to put a muon in orbit around deuterium, a heavier isotope of hydrogen. They confirm that the problem still exists, and there’s no way of solving it with existing theories.

Muons cause problems for protons

Electrons are familiar because they’re a component of the matter we see around us. But they’re part of a larger family of particles (the charged leptons), most of which are much heavier and quite unstable. The muon is one of these, with a mass close to that of a proton’s and a half life of only 2.2 microseconds. But beyond the mass and instability, the muon should behave a lot like a run-of-the-mill electron.

A large team of researchers has been testing this by replacing electrons orbiting around a proton, creating an exotic version of the hydrogen atom. In the fractions of a second before the muon decays, the properties of these atoms can be measured. The team has focused on tracking the energy involved in shifting the muon between different orbitals around the proton, using that to infer the charge radius of the proton.

Their first attempt showed something strange: the value for the radius they got was significantly smaller than the one obtained when you measure using an electron. Remember, the muon and the electron should be equivalent, so there should be no difference. Currently, we have no physics that could explain the difference.

The finding had a statistical significance of over five sigma, which is the standard for announcing discovery in physics. Still, it might have been possible to dismiss this as some sort of experimental oddity. Or at least it was until the team gathered even more data, pushing the significance up to over seven sigma. At this point, there was no way around the fact that we have what has become known as the “proton radius puzzle.”

This may sound like a minor puzzle, but remember that the proton’s radius is tied into theories like the Standard Model, so the result suggested that there might be something wrong with our understanding of some basic physics. Theorists, naturally, responded with enthusiasm and developed some new models that added an additional fundamental force that influenced the muon’s interactions with the proton.

Now, the original team is back with new measurements. Instead of using a single proton, the team has switched to a deuterium nucleus, which has a proton and a neutron.  The presence of a neutron should alter the way that electrons and muons perceive the charge of the proton. The team measured the properties of the resulting muonic deuterium to find out whether this changed the proton radius puzzle.

It’s worth taking some time to appreciate just how hard these measurements are. The muons are produced in a particle accelerator, which means they’re energetic. That’s useful, because it means they’re moving at a substantial fraction of the speed of light, which subjects them to relativistic time dilation and slows down their decay from the reference point of the stationary lab equipment. But to go into orbit around an atom, they have to be slowed down, meaning they’ll quickly decay.

The authors set it up so that the muons entered a chamber full of deuterium and are brought to a halt. As soon as a detector picked up an indication of the muons arriving, lasers started pulsing, providing energy to shift any muons from the 2S orbital up to the 2P orbital. From there, the muons would drop down to the lowest energy orbital, releasing an X-ray as they did. On average with the setup in action, the authors would detect 10 X-rays in an hour; measurements suggested three of them were background noise.

By measuring the precise wavelengths of the laser pulses that successfully shifted the muons into higher orbitals, it’s possible to determine the energy required for these shifts. From there, it’s possible to calculate the proton’s charge radius. Again, the measurement was different from what you’d get for an electron. Again, the difference was huge: 7.5 sigma, well beyond what should be possible as a statistical fluke.

The researchers devote a small section of their paper describing this to considering alternative explanations, ones that wouldn’t require modifying the Standard Model. But all of those are much worse than thinking the new results came about by chance, with probabilities against these alternatives ranging from 44 sigma up to 160 sigma.

So, the proton radius puzzle remains a puzzle. The team behind this new work point to a number of measurements that could potentially help clarify it. Some of them involve better measurements with normal electrons; others involve scattering muons off protons themselves to see if there’s an unknown force at work. The latter would tell us whether anything beyond the Standard Model will be needed to explain this puzzle.