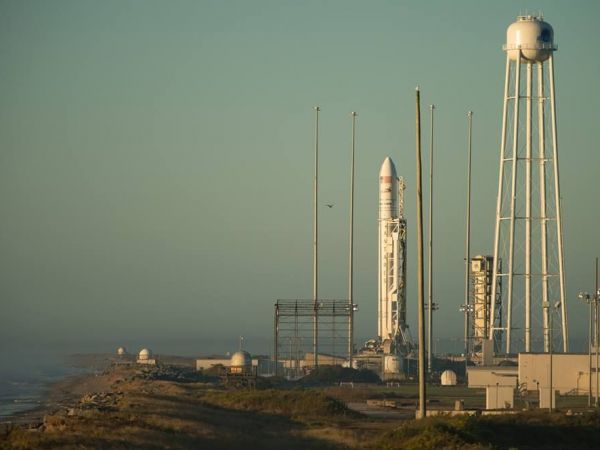 The rocket launch Monday night should be visible across the East Coast, according to NASA officials preparing the launch at the Wallops Flight Facility in coastal Virginia.

The Antares rocket will be launching a Cygnus spacecraft with cargo bound for the International Space Station. This is commercial rocket provider Orbital ATK’s sixth mission to the station, according to a NASA statement.

Launch time will be 7:40 p.m. EDT Monday. It can be viewed live on NASA Television and at the agency’s website. But those on the east coast with clear skies should be able to see the launch by stepping outside and looking up.

The cargo’s arrival at the space station will also be streamed on NASA TV. The rendezvous with the International Space Station should be in the middle of the week.

This will be the first Antares rocket mission from Wallops Island since a rocket exploded on the launch pad in October 2014. With the explosion linked to engine trouble, Thursday’s rocket has been fitted with new RD-181 engines. The new engines were tested at the facility in May.

Here’s NASA’s rundown of some of the research experiments heading for the International Space Station in Thursday’s launch:

Saffire-II, the second Saffire experiment conducted on a Cygnus spacecraft, provides a new way to study a realistic fire on an exploration vehicle. The investigation quantifies the flammability of several materials in microgravity, and compares them to flammability limits in normal Earth gravity. Nine experimental samples of varying materials burn inside an empty Cygnus resupply vehicle after it leaves the International Space Station and before it re-enters Earth’s atmosphere.

Cool Flames investigates the phenomenon of when some types of fuels initially burn very hot, then appear to go out — but then continue burning at a much lower temperature, with no visible flames (cool flames). Understanding cool flame combustion helps scientists develop new engines and fuels that are more efficient and less harmful to the environment. The Cool Flames Investigation provides new insight into this phenomenon, as well as new data on fire safety in space.

The Lighting Effects investigation tests a new lighting system aboard the station designed to enhance crew health and keep their body clocks in proper sync with a more regular working and resting schedule. The system uses adjustable light-emitting diodes (LEDs) and a Dynamic Lighting Schedule (DLS) that varies intensity and spectrum of the LEDs in tune with sleep and wake schedules. Research has shown that enhancing certain types of light can improve alertness and performance while other types can promote better sleep.

A user-friendly tablet app provides astronauts with a new and faster way to collect a wide variety of personal data. The EveryWear investigation tests use of this French-designed technology to record and transmit data on nutrition, sleep, exercise and medications. EveryWear has potential for use in science experiments, biomedical support and technology demonstrations.